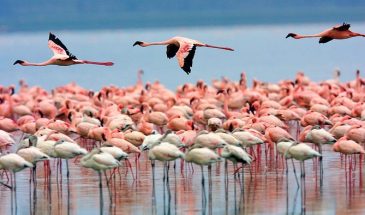 Lake Nakuru National Park is famous for its flamingos and white rhino. The vast flocks…

Lake Nakuru National Park is famous for its flamingos and white rhino. The vast flocks of flamingos at the lake gives it an attractive pink appearance. You will enjoy seeing a host of other birds as well as wildlife in this spectacular lake.

Pick up from your Nairobi hotel or Airport early in the morning and head for Nakuru with a brief stop at the escarpment to view the Great Rift Valley sceneries en-route. Proceed to Lake Nakuru National Park, check in the have your lunch. Later that afternoon, you will go for a game drive to Lake Nakuru, often referred to as the pink lake due to the great number of flamingos. You will also look for the famous white rhino and black rhino found in this park as well as other animals such as lions, leopards, Egyptian geese, waterbuck, giraffe, hyena, buffalo, baboons, monkeys and gazelles. Dinner and overnight at the lodge..

After breakfast, a game drive in the park in search of its popular residents the famous white rhino and black rhino found in this park other animals found in the park include, lion, leopard, flamingos, Egyptian geese, waterbuck, giraffe, hyena, buffalo, baboons, monkeys among others. Lunch, dinner and overnight at the lodge.

Early morning game drive followed by breakfast. After breakfast, leave Lake Nakuru National Park for Nairobi with short game drive. You will arrive Nairobi in time for  lunch at a local restaurant. After lunch, drop off at the agreed spot or transfer to the airport.